I read a tweet last night that I found to be very distasteful.  It was a racist tweet, but of course the author of that tweet didn’t see it that way.  You see, Twitter is no different from any other social media site, personal website, or blog.  There are a lot of people out in cyberspace that feel they can say whatever they want, and not be held accountable, or called out on it.  I am referring to trolls, everyday people, and celebrities.  NO ONE IS EXCLUDED.

I instantly unfollow those on Twitter who tweets negatively about racism, discrimination, religion, politics, belittle their followers, block their followers because they “feel like it” (after talking rudely to them), and whatever else I feel I don’t want cluttering my Twitter feed.  Last night was no different.

One of my now EX-FAVORITE wrestling entertainment superstars, Gregory Shane Helms, aka The Hurricane, posted a tweet I did not find to be funny at all.  It was a bad joke.  Rude, disrespectful, and racist.  Sure, people interpret things differently, but we need to be considerate of others when talking, tweeting, Facebook, Tumbling, and whatever other modes of communication we use while on the internet. 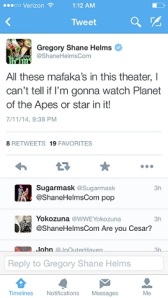 Of course when I read it, I immediately thought, “What the hell?”  Did Hurricane just say that?  He later posted the tweet below, but this time I commented. 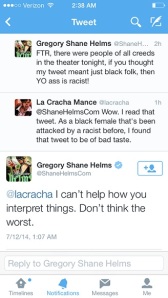 I got what I expected, a defensive response from Helms.  I expected that type of response just from the tone of his second tweet.  He actually said that people are racists if they think his tweet meant just “black folk.”  How are we racists?  He’s the one that made that insulting tweet.

He also told me to not think the worst.  Really?  So just what in the hell am I supposed to think?  Ape is a racial slur towards blacks.

Black people have been called apes, monkeys, and gorillas for centuries, so exactly what is he saying?  That tweet reminds me of that “I’m not racist but” phrase.

As a black female that suffers from PTSD, anxiety, and depression from an assault by a white man who made racist and derogatory comments towards me while trying to choke me, and succeeded at knocking me upside my head, I definitely found Helms’ tweets hurtful.  But that assault was nearly four years ago.  So I would have found that tweet to be insulting years before then, at an early age when I began to learn about racism and racial slurs.

I thought back to a few years ago, when I was playing a game of online Uno on Xbox.  A man with a white avatar greeted me (my avatar is black and looks just like me) with a “Hey nigger.”  He thought he could say whatever he want and get away with it.

So what did I do after I read Helm’s response?  Look at that second tweet again.  On the right-hand side you will see an image of a person and a plus sign.  White background.  If you’re not a Twitter user, then I will tell you what that means.  It means I UNFOLLOWED him.  If I was still following him, the background would’ve been blue.  It’s not worth the stress.

I would say that I can’t believe he tweeted those comments, but I would be lying.  People of all socioeconomic statuses make crude comments everyday.  I hear it all the time in the workplace and in other public places.  I don’t care what people say in private, but publicly, we need to choose our words wisely.  And not get an attitude when called out on our bullshit.

This type of behavior happens everyday, especially by celebrities who really think they can say and do whatever they please without any consequences.

Up until I read those tweets, Gregory Shane Helms was one of my favorite wrestling entertainment superstars.  I was crazy about him on WWE, and I especially liked his storyline with Molly Holly.  That quickly faded.

When a person makes a racist comment in public, and gets defensive when called out on it, then I lose all respect for that person.

The tongue is the most dangerous weapon of all, and those tweets hurt like hell.

I run an honest blog, so everything I type are my honest thoughts and opinions.

What do you think? Cancel reply

Relaxing with a Comic Book

I decided to take a day off from the hustle and bustle and relax on my day off from work. After watching a few episodes of Star Trek: The Next Generation on TV, I decided to do what I haven’t done in a long time, go to the comic shop. I was so excited when […]

Where do I Begin?

Hello! I am finally back from my very long comic book reading and blogging hiatus. I did not expect to be away this long. Actually, I didn’t realize I was away 3 years! Wow. That’s a long time, huh? Anyway, I haven’t read a comic book in so long that I don’t even know where […]

I am so far behind in my comic books that I can scream. I have not written a comic review in a long time. I don’t know when was the last time I read a comic book. I don’t even know if any of my titles are canceled. I have not gone to the comic […]

My Brief Jump in the Stan Lee Mix

I am back from my comic book blog hiatus and I’m starting with one of my random temper tantrums.  This is a no bars hold blog post.  Anything goes.  You have been warned. I remember watching Deadpool movie at the theater two years ago.  As expected, it was packed.  Lines wrapped around every which way.  […]